The Twelve Apostles are a collection of natural limestone stacks standing just off shore in the Port Campbell National Park, on the Great Ocean Road in Victoria, Australia. 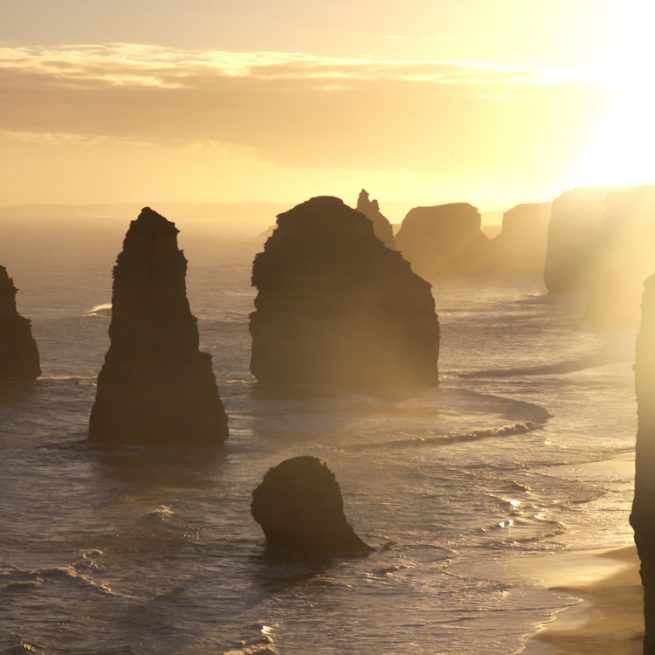 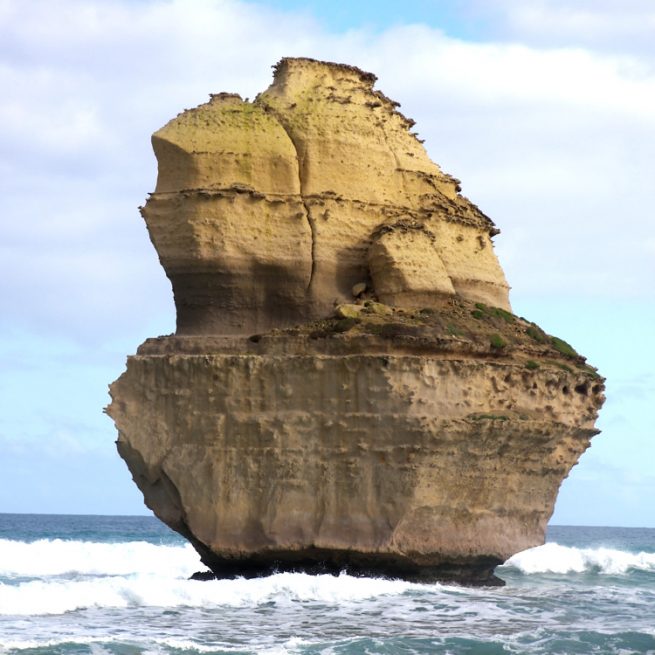 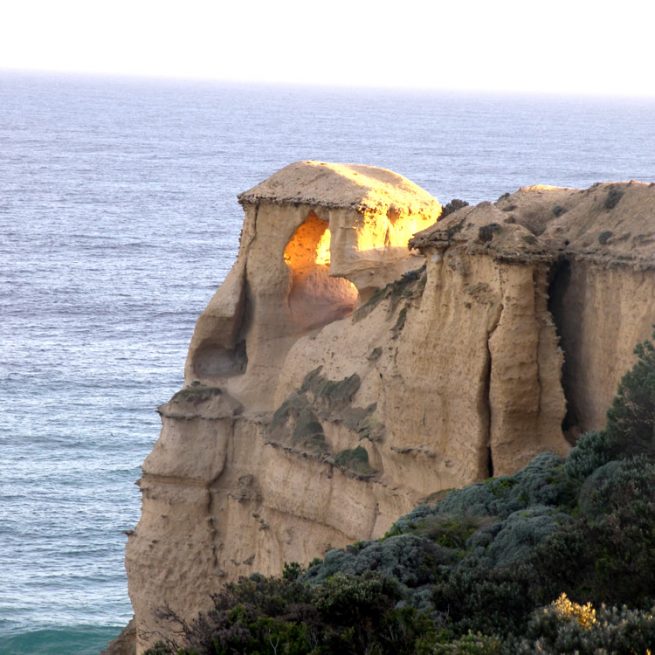 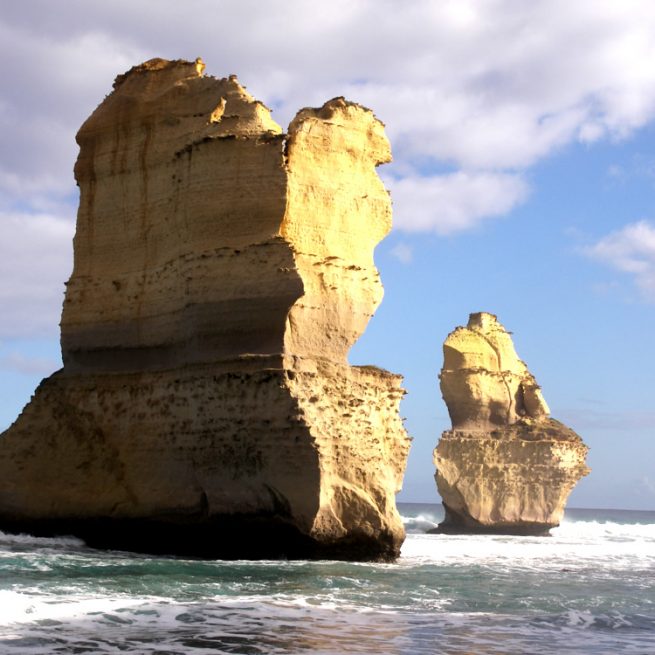 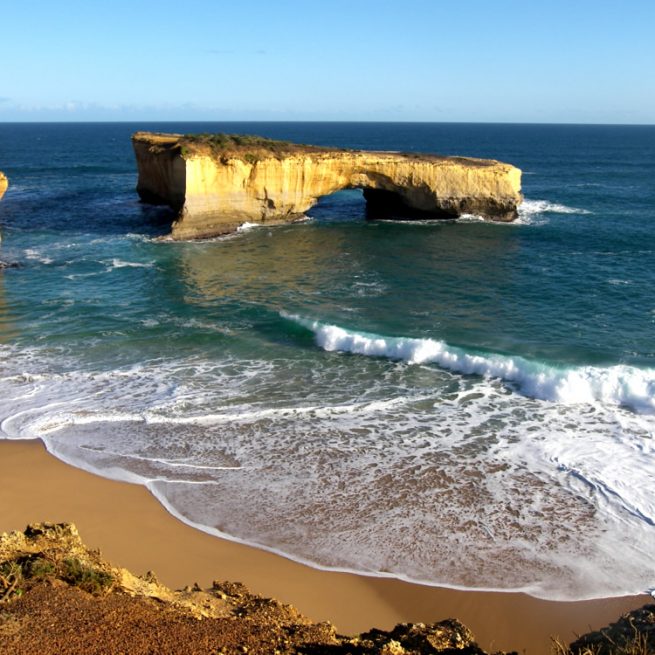 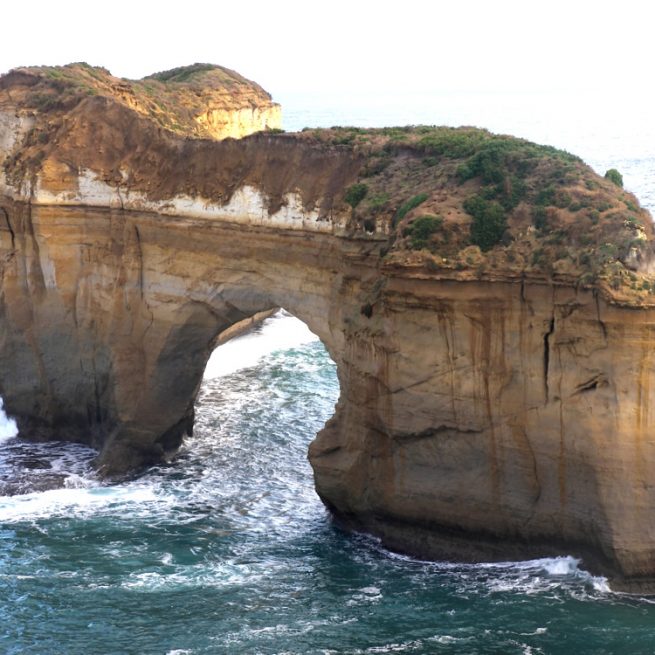 Their proximity to one another has made the site a popular tourist attraction, as well as a popular site for marriage proposals. Originally the site was called the Sow and Piglets. The name was changed in the 1950s to the more majestic “The Twelve Apostles” to lure more visitors even though there were only nine left. The Twelve Apostles are between the towns of Port Campbell and Princetown on the Great Ocean Road. In the early 2000s a visitor centre was built on the inland side of the road, to allow for easy parking and access to the best viewing area.

The stacks have been formed by erosion, and are varying heights and thicknesses. A number have fallen over entirely as waves continually erode their bases. A 50-metre tall Apostle collapsed on July 3, 2005, leaving eight.

Another well-known feature in Port Campbell National Park to succumb to erosion was the ‘London Arch.’

The rate of erosion at the base of the limestone pillars is approximately 2 cm per year.

Cape Otway is a cape in south Victoria, Australia on the Great Ocean Road; much of the area is enclosed in the Otway National Park.

Cape Otway was originally inhabited by the Katabanut people; evidence of their campsites is contained in the middens throughout the region. The Cape was discovered by Europeans when Lieutenant James Grant surveyed the Victorian coast in the Lady Nelson. The government reserved the tip of the cape as the site for a lighthouse. Access to the site was difficult, it was eventually reached overland and construction of the Cape Otway Lightstation began in 1846 from stone quarried at the Parker River.

The light was first lit in 1848; it was the second lighthouse completed on mainland Australia and it remains the oldest surviving lighthouse in mainland Australia. A telegraph station was added to the site when Tasmania was connected to the mainland by a submarine telegraph line from Cape Otway to Launceston in 1859. Parts of the Cape were also open to free settlers.

The lightstation was decommissioned in January 1994 after being the longest continuous operating light on the Australian mainland. It has been replaced by a low powered solar light in front of the original tower.

Guided tours: Cape Otway Lightstation is open every day except Christmas day, from 9am-5pm. During the January & Easter school holidays we open until 6pm.

The park runs along the coast in the Otway Ranges, offering good access to beaches and to the Otway forest. There are many walking tracks in the park allowing access to the beaches. The Cape Otway Lighthouse is adjacent to the park, and open to tourists several days a week (visits by arrangement).

The park is also a popular area for interstate and international tourists. Many companies operate tours in the region for tourists.

Great Otway National Park is a very reliable location for koala spotting as many koalas have made the area their home.

The Great Ocean Road (known as the Surfcoast Highway between Geelong and Torquay) which stretches along the South Eastern coast of Australia between the Victorian cities of Geelong and Warrambool is one of Australia’s great scenic coastline drives.

Hugging tightly to the coast, the road offers outstanding views of Bass Strait and the Southern Ocean. The section near Port Campbell covers some of the most scenic coastline in the world, because of its striking and dramatic natural rock formations. These formations include Loch Ard Gorge, the Grotto, London Bridge (renamed to London Arch in recent years after the ‘bridge’ partially collapsed), and most famously The Twelve Apostles.

Previously assigned State Route 100, it was later designated as B100 and is the VicRoads’ definition of a B-rated road.